Are you planning to trek to Everest Base Camp in February? If you are courageous enough to face the cold and snow, the Himalayan panoramas in February is also beautiful and spectacular. The sky will be mainly clear and somewhat warmer than January at this time.

Pre-monsoon (March to May) and post-monsoon (September to November) are the most popular seasons for Everest Base Camp trekking. However, February is also a good time to travel. February is chilly in the mornings and nights, but pleasant throughout the day, signaling the end of winter. Few people trek at this time of year. As a result, the trail and the lodges are both devoid of masses or crowds.

February is the month of ice and snow in the Everest Region. Because the late-December snowfall ices up and doesn’t melt until mid-March at higher elevations. As a result, the surface of the route will be covered with hard ice. Because of the ice’s slick surface, caution is required when walking.

The typical daytime temperature is around 8-10 degrees Celsius in the first week of the February. As a consequence, you’ll have a lovely daytime hike. However, the temperature drops rapidly when the sun sets, dropping to -20°C to -25°C above 4500 meters. Bright sky and uninterrupted views of Everest, on the other hand, are guaranteed.

In Nepal, February marks the beginning of the late winter season. The average temp begins to rise. However, it remains bitterly chilly at night. Temperatures range from 9°C to -22°C. Warm insulating gear and sleeping bags should be included in your backpack.

In the late after lunch, the days are typically bright, with few clouds. However, you’ll be in the mountains at a high elevation, be prepared for all possibilities that arises in the mountains. Keep looking the weather forecast every day. If the weather begins to deteriorate, you must head to the nearest shelter and stay.

If you hike later in the month, you could get some unexpectedly good weather. It’s also probable that the skies will be clear, with no dampness to obscure the mountain vistas. February is the still off season for trekking to Himalayas due to cold weather climate. Hence, we see fewer visitors across the mountain trail.

If you have the best gear for the Everest Base Camp trek to tackle the winter and freezing weather, the beautiful views and calm paths make February an ideal time to trek in the Eastern Himalayas, even all the way to Everest Base Camp.

Although, very part of Nepal will have chilly weather in early February. The temperature begins to rise later in the month. The everest base camp trek in February is still cold and there will be snow along the route. The average temperature at Namche Bazaar (3440 M) is -2°C to 5°C in February, which is not that cold but, definitely not warmer.

February is still winter, which means it’s cold and snowy along the Himalayan trail. Therefore, many people would rather spend their free time inside their homes. Some others who like to enjoy spending time in the natural surroundings of the Himalayas would rather grab a set of trekking gear and head for the base camp of Mount Everest. So, here, I’ll talk about the advantages and disadvantages of trekking in winter (February).

I hope this will help you to better understand of the benefits and drawbacks of trekking in February. This will definitely allow you to decide yourself whether or not you want to attempt EBC trek.

Remember that solo trekking is highly risky and should only be attempted if you are completely equipped for all sorts of winter weather.

In February, close-fitting and natural trails are typically covered by snow & allow you to travel off-trail and explore. Walking on solid packed snow is considerably more kind on your feet, not to mention more better and more pleasurable than summer hiking in the wide wilderness.

Keep in mind that safety is particularly essential since, in the event of an injury, you may be forced to depend completely on your own knowledge.

Remember that while you are in the nature, it cannot be controlled or predicted about the weather. Sometimes in some part you will see the excellent views. So, have an open mind & enjoy the nature as it is & alert for the unexpected.

There are No Bugs

Many people enjoy EBC February trek, because stinging, pinching, and irritating insects like flies, bugs, and other pests practically disappear during this time of year and leave hikers alone.

In the lower elevation, sometimes insects are insane and they are very active in spring, autumn & summer season. So, you have to wear a long sleeve clothes in the beginning. But you don’t have to worry about such bug richness in the months of February winter season.

There is no doubt about the cold weather and temperature in February. The trekking is linked with chilly weather during this time of the year. You need enough gear for cold weather such as boots, jacket, gloves, woolen hat and other clothes.

To prevent massive freezing of the body, carry enough clothes for cold weather that appear amid the Everest Base Camp Trek.

In February, there will be lot chances of getting frozen of water sources. Water availability & access to enough drinking water is most critical things to know in everest region during the winter season. Lodges along the EBC trek use a fire to melt snow for drinking water especially in winter months such as in February.

As you know, February is the month of the winter season. In cold climates, you need an additional layer of clothes, and overall, extra gear. Even so, you need to carry sufficient diet and fluids that are important for trekking in cold environments, particularly high-altitude trekking like EBC trek.

All tea houses provide you high caloric meals that nourish your body for hiking in the months of February. Don’t forget to maintain sufficient hydration throughout the trekking day. Bring your favorite snacks, peanut butter, and energy drinks with you. If you’re planning an EBC trek, bear that in mind.

Due to the cold weather and precipitation, certain higher elevation treks are not suggested in February. Such as Everest three pass trek. These areas are mostly covered with full of snow and very difficult to cross the passes. For the human safety, national park not recommend and block the trail.

If you are keen to trek in February, Lukla to Namche bazaar is a good option (a couple of days’ hike from Lukla). This short trekking destination can be designed to be on the Everest Luxury Trek or Everest View Trek. In February, trekking below 4000 M is good option & will be more pleasant and safe. You should everyday look weather forecast if you are intended to continue onwards.

If you are not an expert in trekking to high altitude, you may choose a short EBC trek as mentioned above that doesn’t go all the way to base camp. Otherwise, hire an expert guide from some of the best EBC trekking agencies and complete your dream trek to base camp.

Yes! In February, the natural views of mountains and green landscapes are stunning. There is very little chance of getting altitude sickness if you would like to explore Everest from Namche bazaar. You don’t need to book accommodation in advance. Unlikely, you see tourists along the trail.

An individual those who have enough time for a month can prefer Jiri to Lukla trek. This trail was very popular before the construction of Tenzing Hilary airport at Lukla. It will take a week to reach Namche bazaar from Jiri. The drive from Kathmandu to Jiri is 8 to 9 hours. This trek you will give you to understand about Tibetan Buddhist Sherpa culture of higher altitudes.

Finally, the month of February is an excellent time to go on EBC Helicopter tour. Those who can spare a little extra money may go for an overnight stay in some of the best lodges in the Everest region, like Yeti Mountain Homes, Hotel Everest View, or Everest Summit lodges, by helicopter. These hotels are equipped with luxury where you can escape the cold by staying in the highest luxury hotel in the world.

The packing list for the EBC trek in February depends on how long you’ll be trekking and how high you want to go. While packing for your trekking trip, keep in mind the differences in altitude, climate, and your particular demands. I recommend that you conduct some independent research and check for average temperatures and weather trends before packing. I want you to know that you will not require all of the goods mentioned below.

The majority of the inhabitants of Everest region are Sherpa who practice Tibetan Buddhism. Sherpa people does not generally celebrate same festival as Hindu Nepali celebrate. However, the February is good months for festival celebration both in Himalayan & hilly region of Nepal.

This festival falls on the fourteenth day of the waning moon in late February early march. The night of Lord Shiva’s birth is commemorated as Maha Shivaratri. This great night of God Shiva is associated with a number of myths and legends.

According to legend, the poisonous Halahal emerged from the sea during Samudra Manthan. It began to wreak havoc all over the place. Lord Shiva took the poison and managed to hold it in his throat in order to save the universe from destruction. This festival can be celebrated while you are in the Kathmandu at Pashupatinath world heritage site.

This festival normally falls in February first week according to the Tibetan calendar. This festival is mostly celebrated by Sherpa, Tamang, Gurung people of Himalayan region. You may have chance to observe this festival during the Everest Base Camp trek in February.

Holi is a colorful event. In Southern Asia, this event also marks the end of winter and the beginning of spring. According to the Nepali calendar, Holi is celebrated on the full moon day of Falgun normally falls in late February & early march.

As a result, Holi is also known as Fagu Purnima. Colors, splashes, sweets, and music are used to celebrate Holi. People use color to express their love for one another. While this festival is unlikely to be observed in the Everest region. You can participate in Shiva Ratri and Holi festivals in Kathmandu before or after your Everest base camp trek.

The breathtaking vistas and peaceful roads make February a great time to trek in the Eastern Himalayas, even all the way to Everest Base Camp, when you have the appropriate gear for the Everest Base Camp trip to endure the winter and frigid temperatures. 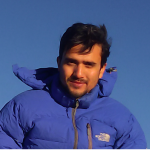 Everest Base Camp Trek in October

Everest Base Camp Trek in August

Everest Base Camp Trek in September

We use cookies to ensure that we give you the best experience on our website. If you continue to use this site we will assume that you are happy with it.OkPrivacy policy